H.E. Michael Scott Feeley, Lieutenant of Honor and seventh Lieutenant of the Western USA Lieutenancy, has been appointed a member of the Grand Magisterium of the Equestrian Order of the Holy Sepulchre of Jerusalem. The Cardinal Grand Master directed that Sir Michael’s four year mandate commences on January 1, 2020. The Grand Magisterium is the international governing body of the Order.

In addition to Sir Michael, there are currently two other American members of the Grand Magisterium: H.E Tom Pogge, the Vice-Governor General for North America, and H.E. Mary O’Brien, the former Lieutenant of the Northwestern USA Lieutenancy.

By decision of the Holy Father, His Eminence Cardinal Fernando Filoni has been appointed Grand Master of the Order of the Holy Sepulchre starting this December 8 2019, Solemnity of the Immaculate Conception. We publish below the official communiqué of His Eminence Cardinal Edwin O’Brien, Grand Master of the Order since 2012, who concludes his mandate a few months after reaching the age of 80.

Click here for the full announcement from the Grand Magisterium.

Celebration of the 800th anniversary of St. Francis’ Pilgrimage of Peace

At the end of the celebrations for the 800th anniversary of the Pilgrimage of Peace of St. Francis in the Holy Land, the Custos of the Holy Land, Father Francesco Patton, blessed the new bronze high reliefs of the Via Crucis, donated by the city of Verona, Italy.

Latest visit of the Holy Land Commission to Jordan

September 16, 2019 – Mr. Sami El- Yousef , Chief Executive Officer of the Latin Patriarchate of Jerusalem, shares his reflections regarding his latest visit to Jordan with the Holy Land Commission.

Our Chancellor and incoming Lieutenant, Dame Margie Romano, DGCHS, announces the appointment of Sarah Knob as the new Executive Director of the Western Lieutenancy. Sarah’s extensive work experience and warm personality have prepared her well for the role. Dame Margie asks that we extend to Sarah our warmest welcome to the team. 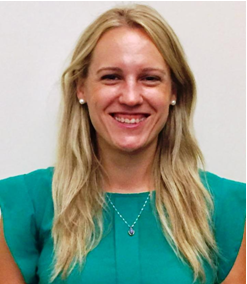 Sarah received a B.A. in Humanities & Spanish and a certificate in accounting from the University of Steubenville. She has over 10 years of office administration experience both in the private and not-for-profit sectors. She has a strong background in board relations and membership relationship management. Her various office positions over the years included the promotion of office management best practices to streamline business flow to ensure both profitability and membership satisfaction.

Sarah was Office Manager and simultaneously managed general bookkeeping for multiple company files and worked with CPAs to provide financial reports to the Board of Directors. Sarah recently moved to Los Angeles from Chicago. She looks forward to serving the Western Lieutenancy as Executive Director and working with Dame Margie Romano to meet membership needs.

We are pleased to keep you up to date on the good works that are being accomplished through your support of the HLEDF! Your contributions to the fund are directly and positively impacting the lives of Christian families who need financial assistance to grow and maintain the small businesses they operate in the Holy Land. We have recently been able to provide funding for two new loans. Click here to read the latest report.

Most Rev. Sir Edward Joseph Weisenburger, KC*HS,
Introduced as Prior for the Diocese of Tucson

Most Reverend Sir Weisenburger, KC*HS, was a member of the EOHSJ for 15 years before his appointment as Bishop of the Diocese of Tucson. As Prior, he has always included in diocesan liturgies the Knights and Dames of the Tucson Area in their robes. He was previously Bishop of the Diocese of Salina, Kansas, where he was the only EOHSJ member. Click here for full story in Tucson Area News.

The Latin Patriarchal Seminary of Beit Jala (Seminary), one of the institutions our Order supports in the Holy Land through the Adopt-A-Seminarian program, has provided photographs documenting its various activities during the academic school year 2018-2019. Located near Jerusalem, the Seminary educates, trains, and forms men to serve as priests for the Roman Catholic community of the Holy Land.

The Seminary was founded in Jerusalem in 1852 and transferred to Beit Jala in 1857. The curriculum includes a year of spirituality, a year of French, two years of philosophy and four years of theology. From its founding in 1852 until 2008, the Seminary formed and ordained 260 priests, 12 of which became bishops and three became patriarchs. We would like to share these beautiful and inspiriting photos sent by Fr. Yacoub.
Click here to see the entire album.

The Most Rev. Gerald F. Kicanas, KC*HS, bishop emeritus of Tucson, Arizona will be honored with the Archbishop Pietro Sambi “Star of Bethlehem” Award (Award) for services to the Bethlehem University Foundation (BUF).  Read the full story here.

“Reflections from the Holy Land: Visit to Jordan”

By Mr. Sami El-Yousef, Chief Executive Officer of the Latin Patriarchate.
Mr. El-Yousef will the speaker at the Western Lieutenancy’s 2019 Annual Meeting.